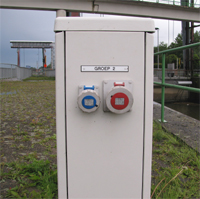 Shore power is the term used to indicate that a ship makes use of a connection to the shore power network. In principle, sailing ships use their own generators to generate electricity. However, running the diesel engines in the port is unnecessarily harmful to the environment. It mainly causes emissions of CO2, NOx and PM10 particles.

To make optimal use of the added value of shore power, a harmonisation of the management system and payment system is being sought.

Joint contract by the port companies in the Netherlands and Flanders for the Management, Maintenance and Services of shore power

Shore power is the term used to indicate that a ship makes use of a connection to the shore power network for its on-board power supply. In principle, sailing ships use their own generators to generate electricity. However, when a ship is stationary for a longer period of time, running the diesel engines unnecessarily pollutes the environment. It mainly causes emissions of CO2, NOx and PM10 particulates. Shore power allows bargees to make maximum use of their on-board facilities without emissions (via a generator or main engine).

The environmental benefits compared to electricity production via the ship's generators are considerable. The use of shore power reduces local emissions of harmful substances (CO2, NOx and PM10 particulates) and ensures less noise pollution and odour nuisance. It therefore improves the quality of life on board and ashore.

Directive 2014/94/EU of the European Parliament and of the Council obliges Member States to include in their national policy frameworks the need for shore-side electricity facilities for seagoing ships and inland waterway vessels in maritime and inland ports. This shore-based power facility shall be installed as a matter of priority in ports on the TEN-T core network and in other ports by 31 December 2025, unless there is no demand and the costs are disproportionate to the benefits, including environmental benefits.

In order to comply with the European obligations, a project proposal "On shore Power in Flanders" was submitted to the European Commission on 25/03/2013 for the development of a shore-based power network along Flanders’ waterways and in its ports in the framework of the Trans-European Transport Network (Ten-T). This project, totalling 2,244,000 EUR, for which a subsidy of 1,122,000 EUR is obtained (50%), started on 01/04/2013 and ended on 31/12/2015. The partners of the project were the Department of Mobility and Public Works, Ghent Port Company, Antwerp Port Authority, nv De Scheepvaart (DS) and Waterwegen en Zeekanaal NV (W&Z).

The project encompassed the following activities:

The installation and/or adaptation of shore power facilities, so that they can be included in the uniform payment system, was carried out by the three partners (Port of Antwerp, nv De Scheepvaart and Waterwegen & Zeekanaal NV). This gave rise to multiple local management systems, so that the bargee had to register several times. In order to improve user-friendliness, a joint 'Central Shore Power User Management System' was built, so that a bargee only needed to register once to get access to each shore power cabinet of the different partners.

The Belgian regulation on public procurement is based on European regulations. Depending on the nature of the contract, the government must follow a specific procedure to choose between the different companies that are candidates for performing the contract.

De Scheepvaart, Waterwegen & Zeekanaal and the Port of Antwerp placed a public contract on the market for the construction of the shore power installations in Wijnegem and Evergem and the adaptation of the shore power installations in Antwerp-Waiting dock. All contracts were carried out by a different contractor, which led to a separate local management platform (local management system LOBES). All this meant that a bargee had to register for each installation separately or that, in implementation of the joint action as part of actions 2 and 3 of the TEN-T project, these local platforms were integrated into a central management system (CEBES).

From the bargees' point of view, it is advisable that all facilities (shore power, water, waste) in the ports and along the waterways are offered to inland navigation (and by extension maritime navigation and pleasure cruising) in the same way, while harmonising to a maximum extent the use, procedures, payment methods, etc. for all locations.

Moreover, the port companies/waterway managers in both the Netherlands and Flanders experience the same problems or challenges when it comes to offering shore power (problems with short circuits, earth leakage and overcurrent), standardising and expanding the shore power network. Shore power is a niche market and cannot be compared to e-parking. To date, not every service provider can access every shore power cabinet. The general aim is to strive for interoperability (open market).

From the bargees' point of view, it is appropriate to introduce a uniform rate.

The common objectives to stimulate and expand the use of shore power should lead to a joint approach to facilitate the supply of shore power as simply and reliably as possible. In the light of this optimal service, consultations were held with Flanders’ ports, in a second phase also with a number of ports in the Netherlands. Given the intensive cross-border shipping traffic, a uniform system in all these locations is recommended. This offers a unique opportunity to provide users, through a joint public contract, with access to the various inland waterway services in the Netherlands and Flanders via a single central management platform.

The shared objectives have led to a joint approach whereby the supply of shore power (later also drinking water and waste collection) is facilitated as simply and reliably as possible.

The partners of this contract are:

Shore power is already being offered at a number of locations, see 'Request shore power' on www.walstroomplatform.be.

The overall objective of expanding shore power continues to apply. In order to increasingly anchor shore power throughout Flanders and along the waterways, substantial efforts are still to be made. With this, the ports and waterway managers commit to increasing the number of charging points in order to improve the air quality, not only in the ports, but also in residential areas near docks.